Hope everyone’s had a great weekend.

Let’s just get right to it.

Photo by Calvin Lupiya on Unsplash

You’ll remember last week’s post where I talked about running in place, the two different sources of dissatisfaction, and a few other things.

You’ll also probably remember what I talked about the week before last, about guts over fear, and if you really want to do something, to just do it.

I think both of those topics have to do with concrete things.

But there’s something else that ties in with what people do in every day life, why they do it and how.

Come to think of it – it also ties in with what people don’t do in every day life, and why they don’t do it as well.

There’s two key players in our brains – logic and creativity.

Some may argue that the two are separate, because they’re opposites. Logic is left brained while creativity dominates the right. The same could be said about emotion.

True, but while emotion and creativity are different from logic, they still support each other in certain functions.

Logic allows us to execute a systematic and structured plan of action to carry out our creative thoughts.

Picking up the paint brush, holding it a certain way, mixing certain colours, dry time of the canvas, layering, etc, etc. The same goes for photography.

Logic can also allow us to step away from an emotional situation and take an objective look at why that emotion is being felt in that situation.

Creativity can allow us to create something useful, something functional, with aesthetic appeal, or a “fun” element to it.

Emotion allows us to put the human back into humanity when logic fails to acknowledge when emotion is needed to maintain rationality, and vice versa.

So if logic and emotion, or logic and creativity can be interdependent on each other, lend to each other, and at the same time can be considered vastly different qualities that can be separated from each other, why then, don’t people apply this to a fundamental part of their lives – their careers?

What about their relationships? Personal development?

I could go on, but the point I’m trying to make here is, in today’s society it’s important to remember that you’re not what you do.

You’re not your job.

You’re not your job title.

You’re not the car you buy.

While it’s great to have all that, remember who and what you are, without all of it.

You gain the weapons and the armor from money earned at each battle, but you gain the better health, skills, and other things from experience points.

You’re a living being that (hopefully) progressively changes as you gain experience with new, different, experiences, constantly getting to know yourself better.

Experiences and situations are accessories that you choose to take on or confront in your life.

So why not separate yourself from all that other stuff – the job, the car, the house, the fucking material?

Ego is a very abstract thing. Logically you can’t define it, it’s pretty difficult to pin down.

Fuck what religion, or spirituality, or all of that stuff says.

I think those types of things can still taint or manipulate the message of what ego really is for their own benefit, which I’ll explain towards the end of this. 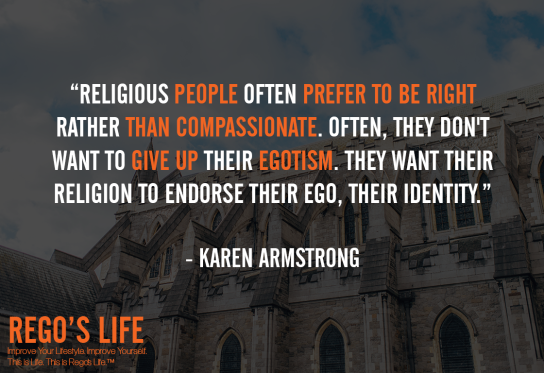 Photo by Ian Schneider on Unsplash

I’m not saying I have a perfect definition for it either, but I will say this: people today, not that they haven’t been before, but even more so today, with the advancements of technology, and the comfort of convenience, which has ultimately lead to a false perception of self-reliance, are running wild with their egos.

Your ego tells you you are your job.

Your ego tells you you are the only person in the household who gets things done.

Your ego tells you you are lower, middle, upper, and elite class.

Hell, society tells you you’re all that too.

Society tells you if you drive this car you’re this. If you wear this, you’re that. If you live in this neigbourhood, you’re this.

Society also has a tendency to try and dictate to you what you aren’t, as well.

It goes both ways, too.

Society itself, is a collection of egos, communicating to other egos – your ego.

The most popular stuff is shoved in front of your face everyday on Facebook, Netflix, Instagram, cable TV, Twitter, the news, shop windows, magazines, movies, on and on and on and on…

But if you strip all the “accessories” away, what are you?

What you want to do?

Without anybody telling you, have you made these decisions yourself?

Photo by Serge Kutuzov on Unsplash

I’ve said it once and I’ll say it again.

What you do, is not who you are. What you’ve done is simply a history, a timeline, of how far you’ve realised your own potential and pushed your own limits.

Mediocrity never was, and never should be an intended destiny for a species as intelligent as the human race.

Your only competition is the version of yourself you were yesterday – so don’t let others measure you with their own limiting beliefs – know your worth. 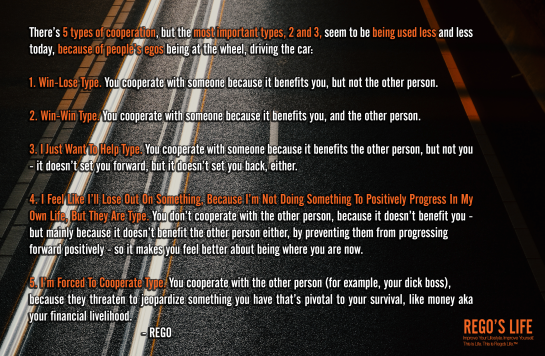 People’s egos run wild when they try to do this to other people.

Telling them WHAT they are, rather than asking.

Telling them WHERE they should be, rather than letting them just…be.

Acting like they’re helping someone, only to gain mileage for themselves later.

Trying to hold someone back when they see them positively progressing forward, because they’re not happy with their own progress.

I’m not this blog.

Not the places I’ve been.

Not the work I’ve done.

Nor the entreprenurial pursuits.

Not the photos I’ve taken.

Not the people I’ve dated.

Nor the friends I have.

I’ve enjoyed all those things and still do – but they’re all a part of my life – they’re not me.

I’m a living, breathing, organism, who’s amassed knowledge, feelings, experience, and an understanding of myself from things I’ve chosen to turn my attention to.

I’m just one big makeup of energy, choosing to expend myself on whatever I feel is right on a day-to-day basis, and recharging at night.

I prefer to expend energy into things that’ll exchange that same positive energy.

But this is the important part.

I’m not talking about this bullshit, “you are what you think about most, always go around being nice to people” stuff.

Because this is what most people leave out:

There are a shit ton of people out there who can “act” nice to each other.

It doesn’t mean they want to see you do good – or even better than them, for that matter.

Will said something very interesting along the lines of this a while ago, have a listen:

Who are the people that are fanning your flames?

But what people have to realise is, no one is doing better than anyone else.

You’re just doing you. If you weren’t in their life, what would they have to measure themselves with? Someone else? What if no one was in their life?

You can’t possibly be “doing better” than anyone else, if everyone has their own personal goals and milestones.

So what do you care if you help someone out when they’re earnestly looking to become a better version of themselves?

You’re not what you do, but you’re not alone. 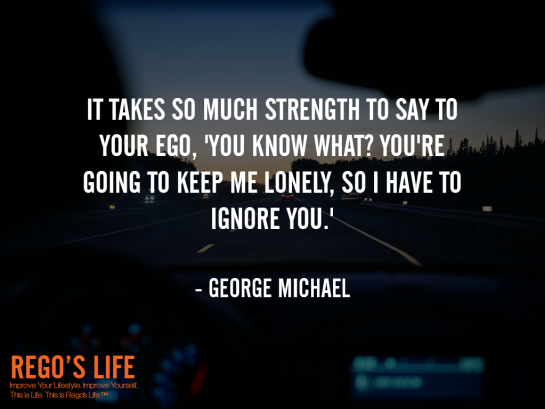 Photo by Patrick Tomasso on Unsplash

So check your ego at the door.

Have a sense of who you are at your core.

Be cordial (be nice).

Lift up the people you call your friends, family, lovers, and others who are looking to do a little good in the world.

Look for others who do the same.

And don’t fuck with people who do any of the negative stuff you just read about.

Photo by Thong Vo on Unsplash

Musings Episode 85: Ego… is a post from and appeared first on Rego’s Life