Well…it’s been a while.

The kind of “I’m just going out for cigarettes” while, where you bump into the person 3 years later and have that awkward reunion.

Except, in this situation there’s no child.

Alright – maybe this won’t be *that* awkward.

So why the long break – well, I needed a break – as in, I needed to rethink the meaning of everything I was doing. These past few years I’ve been reflecting on what’s *missing* from Rego’s Life.

I covered a lot of life subjects before, but somehow, something always felt like it was missing. So I stepped away.

Sometimes when you’re too close to something, you can’t see the answer that’s right in front of you.

I stepped away…to come back stronger. And that’s exactly what I’m going to do.

Things will be a bit different.

The old favorites will still be around – no worries there.

But like anything that matures with age they’ll be better, more seasoned.

Speaking of coming back stronger, that’s actually the topic of this episodic musing.

Most people at some point have some sort of setbacks or hardships they go through in life – in any aspect of life. It could be financial, business, academic, family (or any other type of relationship), but a hardship or challenge nonetheless.

The type that can knock a person off their feet – a K.O. so to speak.

The question when that happens though is “what now?”

What are you going to do about it?

Are you going to lay there on the mat, stuck in between conscious and unconscious, hearing the world go on around you and give up the will to get back up?

Or are you going to come back stronger?

Sometimes it takes additional training and a few more fights to come back stronger.

I remember watching the movie “Rocky Balboa” a while back, the 2006 version, where Stallone says (while in character) something to his on-screen son:

“Let me tell you something you already know. The world ain’t all sunshine and rainbows. It’s a very mean and nasty place and I don’t care how tough you are it will beat you to your knees and keep you there permanently if you let it. You, me, or nobody is gonna hit as hard as life. But it ain’t about how hard you hit. It’s about how hard you can get hit and keep moving forward. How much you can take and keep moving forward. That’s how winning is done! Now if you know what you’re worth then go out and get what you’re worth. But ya gotta be willing to take the hits, and not pointing fingers saying you ain’t where you wanna be because of him, or her, or anybody! Cowards do that and that ain’t you! You’re better than that!”

The one line that really stuck out in my mind was this: 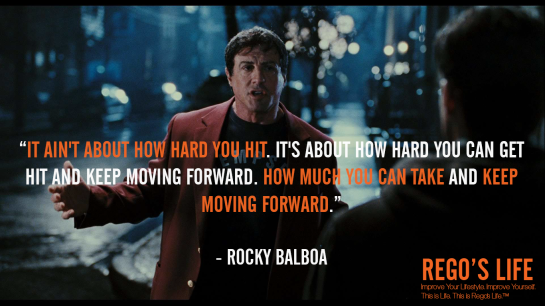 This is probably the best line I’ve heard in a long time, and it really resonated with me after not having watched the film in a while.

No matter how many times life knocks you down, you’ve gotta keep moving forward.

A lot of people get this confused – it’s not about moving up – as I mentioned in one of my previous episodic musings what goes up must come down – but what moves forward, well that’s an entirely different beast all together.

And like in rugby, or American football, life can dish out a lot of hits at you…but you’ve gotta look at them as lessons.

This can be a hard concept to wrap your head around, especially when you’re in the thick of it, but by lessons I mean opportunities to fortify yourself for next time, or the next obstacle you might meet.

The same way a rugby player trains so he becomes harder and harder to knock down, is the same way a person can train for the game called life.

And another thing – don’t look for “alright.”

I’m usually not one to talk politics a lot but ever since the whole Brexit and Trump ordeal it seems like xenophobia has exploded in some parts of the world, and I hear some people saying “everything’s gonna be alright” to others.

Well, I’ve got one think to say to that.

It’s a crappy way to cope with a situation.

You think during the World Wars that soldiers settled for “alright” every time they laid out a battle plan? You think that “everything’s gonna be alright” speech really settled their hearts and eliminated their fear, when they were out there, being shot at?

During the WW’s they fought for more than “alright” – they fought with the thought of getting back home to a better life – despite the fact politicians were pulling their strings.

They fought because they had hopes for a future that contained more than just “alright.”

They fought in hopes that their offspring wouldn’t have to fight wars if they didn’t choose to, but come back stronger, and better – not go soft and become indifferent to what was happening around them.

And most of all, I’m pretty damn sure they thought that their sacrifices made would be a reminder to future generations to grow wise, and not accept life, or another human being for that matter, to just walk all over them.

They fought for an “everything’s gonna be awesome future”.

Not an “alright” one.

A lot of what makes up this thing called life involves other lives in it…and with the way things have been going, it seems that sadly, those lives seem to think they can intrude on other lives.

But in the words of Epictetus, and to paraphrase him slightly, to attempt to control the will of another person takes tremendous effort, or sacrifice. It goes against he law of nature, dictating someone’s future to them.

So don’t just roll over and let someone dictate your free will.

There’s another great line from Rocky Balboa (2006) I think I should leave you guys with: 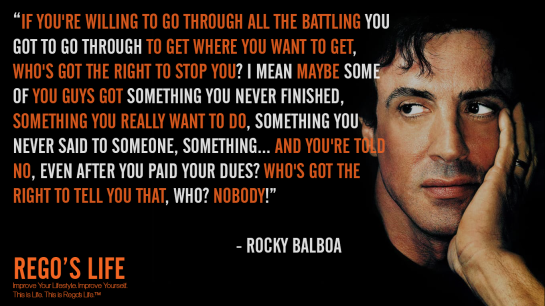 When you get hit hard in life, don’t just lay there and accept that everything will be alright.

Get off that mat and keep moving forward in the direction YOU want, how YOU want things to go.

A diamond blade cuts through rock only after being forged under pressure.

Musings Episode 73: Come Back Stronger… is a post from and appeared first on Rego’s Life