Anyone seen the movie The Secret Life of Walter Mitty?

Seriously. I mean it. Book your tickets here and run out of the house to go see it.

What I thought to be a remake of the original 1947 version (which according to IMDB it seems it was), this movie focuses on EXACTLY what I have been writing about ever since I started this blog…and of all the movies I’ve seen, just jumped to #1 in my rating book, right up there with The Wolf of Wall Street.

Ben Stiller both directed and produced this film – and due to those reasons I believe this gave him TREMENDOUS freedom in creating/becoming his character the way HE wanted Mitty to be seen. By far the best acting I’ve seen from him to date. Stiller, you’re awesome. 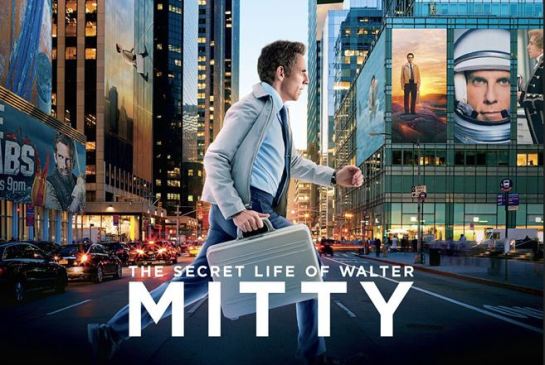 The whole premise of the movie is simple – it’s about an ordinary guy who’s got a knack for developing negatives for LIFE magazine. He’s been at the game for 16 years now and really knows his stuff – but ironically, though developing thousands and thousands of photos of numerous places around the world…has never actually gone a single place that’s mentionable or interesting himself.

Put simply – Walter (Stiller) has never lived LIFE. Because of the fact his life is so repetitive, over the years Walter has increasingly become more and more active in day dreaming or “zoning out,” often beyond his control – a clear sign the poor bastard’s mind can’t even come to terms with his monotonous day to day life.

Until one day, he’s forced to get out there and explore – not for himself – but to save his job.

The movie takes a minute or so to pick up and gain momentum – but the ending leaves you literally FEELING every single moment…something that rarely happens these days unless it’s a good action film (in my opinion).

All in all it’s a great film that anyone can go and see.

It really hits home on important issues like how people don’t just need to – but deserve to live the life they desire – and how quickly and often the day to day activities that have been built into the majority of society’s routine often make people forget that they’ve gotta CREATE a life – and not just live one.

What’s the difference between creating and living a life? Find out more in a “Make it Mondays” post I wrote on my official site.

Mitty is portrayed in flawless fashion – someone who at first when pondering over the “mission” thinks “yeah right” or “it’s impossible,” non-chalantly brushing it off until his office crush encourages him bit by bit.

Even when he makes it to Greenland, Mitty still has extreme reservations.

Then slowly, you see something happen – he slips more and more into the thought, the idea – he starts embracing it and soon one action leads to another, like a car that’s jump started on a downhill slope as it picks up momentum.

Pretty soon he’s doing more, living life, more than he ever did before – and has no intention of looking back. One simple mishap in his job causes him to take a leap forward in his life – and pretty soon, the involuntary zone-outs stop. Why? Because he’s started living life..and stopped suppressing what his mind wanted his body to do for YEARS.

…and this is what I mean about doing it for yourself – living your life for YOU – and no one else.

Humans aren’t meant to be creatures of repetition. People are one of the most intelligent beings on the face of the earth, yet limit their potential. So. Goddamn. Much.

Like I keep saying time and time again, if a person can get up and get something done for their boss, or their job, or anything for anyone else EXCEPT themselves – then what in the hell is stopping them from doing it for themselves and themselves ONLY?

No more pacification. No more substituting living your actual life with day dreams or reality TV. Why watch other people live their lives when you can live your own? No more doing something because your head is on the chopping block at your place of work.

You can’t seriously believe that you were just put on this earth to work a job and build someone else’s dream, can you? I didn’t think so.

I’ve seen countless clients get things accomplished for everyone but themselves – and the first thing I do is (figuratively) throw a book at them to get that thinking unlearnt. It takes work, it takes persistence, and it takes perseverance and preparation…but it’s worth it. It’s priceless, if it means living a life you can say was WORTH living.

It’s time to get out there and do something for you. Start small if you have to, then go big…but the main thing is to make your absolute best effort your ONLY effort. Don’t settle for less – you deserve the best.

Look out for tomorrow’s Make it Mondays post on my official site – I’ll be giving away tips on a MAJOR aspect of how to get the momentum going towards your ideal lifestyle.

Musings Episode 44: Walter Mitty Had it Right… is a post from and appeared first on Rego’s Life

22 thoughts on “Musings Episode 44: Walter Mitty Had it Right…”