15 men on a dead man’s chest…yo ho ho and a bottle of rum….. – no, I’m not aiming for a remake of Pirates of The Caribbean…not quite sure how many movies they’ve put out to date yet, to be honest.

I’m talking about an epic little drinking spot at Pier 27 in Embarcadero near Lombard, in San Francisco, Cali.  Aka a shipwrecked boat. That’s been – wait for it – converted into a bar.

Ever so affectionately called America’s Cup Sports Bar. Talk about turning spoiled milk into cheese. The guys at Team Oracle did just that when they took their crashed (and sunken) AC72 catamaran, recovered it and transformed it into a bar, opening their doors back on Independence Day (4th of July, 2013). What makes it feel even more exclusive is the fact that it’s only open until September 30th, and then closing indefinitely after America’s Final Cup race.

I don’t know about you, but those kind of things make me want to take photos or leave my hand prints on the walls with finger paint and an added signature. Just something to say I’ve been there and experienced this small snippet of history. I know, I may seem like I’m going on about something that’ll be written in history books and taught in schools nationwide, but when a bar – or any venue for that matter has a limited time frame like that for being open, I like being a part of it.

For starters it’s definitely a conversation piece. You can take friends, family, or even a date here, and enjoy great food plus an entire beverage collection hand picked from mixologist Scott Beattie, a legend in his profession. So what do you do? Well, after lounging at the beach for the better half of your Saturday, either on the sand or off the shore on the dock of your own boat, you grab a couple friends, book a private lounge area, then throw on some real clothes and come here for good food, good drinks, and enough large flat screen TVs where everyone can enjoy watching the thrill of the races (that’s boat races, just in case we’re still not on the same page yet).

Me? Personally, I’d order up a Frisco Mule and MexiCali Dips before starting on some pulled turkey sliders – all while listening to the sounds of the live concert going on in the background, featuring Cheech & Chong with WAR.

Go ahead – if you’re not in San Fran already get your bum on the next Red Eye and check it out. You’d be crazy to miss it.

This next one is for the James Bond enthusiasts. Anyone remember the last Bond film with Pierce Brosnan – Die Another Day? Good…now remember the Ice Hotel Bond shacked up in with the blonde who betrayed him?

Let’s be honest though – he should’ve known better. She wasn’t even that great. *shrugs*

Okay, so maybe it was a palace – but that’s not the point here. The point is, there’s a place like this that actually exist…and it’s called Frost Ice Bar. Get out your down coats and furs for this, and appreciate the warmth of the booze going down, as it’s 21°F/-6°C in here. They provide “snoogie” like garments but I’m a stickler for staying stylish, so I’ll stick with my boots and high collar jackets, please and thank you.

Nestled away in Boston, MA – this place is the ultimate in excuses to cozy up to a certain someone while enjoying a drink and playing conversationalist. If you fancy giving your date a bit of a background lesson, you could start by mentioning that if it isn’t obvious enough, the place is comprised entirely of ice – from the walls to the furniture, and naturally, the glasses you’ll be drinking out of. It’s also the largest permanent indoor ice bar in the world.

“Let’s shuffle this way and take a seat over there, shall we?”

You won’t have to worry about him/her falling asleep on you either – or, you know, freezing to death. The maximum stay is 45 minutes – so that’s just enough time to feel that drink kick in before your nose starts to look like Rudolph’s in all those Christmas stories you were told as a kid. So you can go ahead and take your time with that glass of American Honey – just be sure not to linger over it – remember, you’re still dealing with ice –  so clutching to your drink as you normally would might just result in frost bite.

Because of the short stay time it’s a place that’ll resonate in your mind a bit more and keep you coming back again and again. It does close earlier than your usual bar – around midnight – but it’s worth it. Keep in mind you’ll also have to book ahead of time, and I recommend getting there 15 minutes in advance so you don’t lose your reservation – the place is more popular than you may think.

It’s not everyday you get to lounge on a couch made entirely of ice. 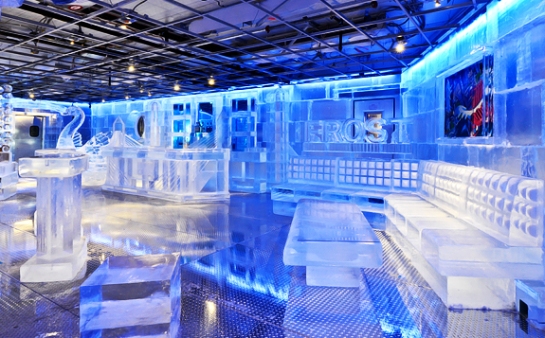 Alright now enough drinking. You heard me – put the Johnnie Walker Black Label down and step away from the glass…slowly…that’s right – now toss me the keys to your Maserati – here’s a bottle of water. I’ll be back in an hour while you sober up.

Still feeling like shite? I thought so…well, fortunately for you – there’s a fix for that. If you’re in the Las Vegas or Miami area, the people over at Reviv can take you into their (needle loving) care. Hey – don’t look at me like that – it’s not what you think, so quiet. Think of healthy things like Vitamin B12, multi-vitamins, and saline. All inserted intravenously, meaning a near instant cure and picker-upper for you. Lucky you.

If you’re not a fan of needles (like myself) or maybe just highly allergic to Ibuprofen and afraid of pain numbing agents even if they are natural (again, like myself), that’s okay – you don’t have to freak out over the site of a needle being injected into your arm while you watch the IV drip empty slowly. Instead, you could just try their “Quik Fix” Therapy – aka needleless injection. Chock-full of multivitamins, B12, energy boosters, and acid reflux medication, it’ll have you up and going in no time – without the need of a band-aid to the arm. 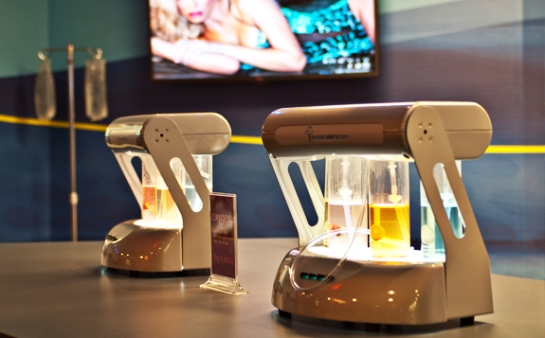 Because not everyone can shake that one scary experience of going to the doctor when they were 7.

Even if you’re too weak or hungover to come to them, that’s okay – like a pro doctor in Portugal they’ll come to you to heal (most) of your party hard weekend ailments. Reasonably priced, convenient design and a brilliant concept – these guys know how to put the “original” in originality. If you do happen to make it out to their facility though, they don’t disappoint. With supple leather massage chairs, iPads and premium headphones, you can take full advantage of their free Wi-Fi and catch up on that last season of Archer you missed while re-powering a new you.

With a laundry list of therapies like Royal Flush, HydraMax, UltraVive, MegaBoost, and an O2 Bar (that’s oxygen, in case you struggled in chemistry…it’s okay – I sucked in grammar. I know right…hard to believe), you’re bound to find something that’ll suit your need.

Think of it like a medicine bar…because in theory – and well, practical too….it is.

“I feel sorry for people who don’t drink. When they wake up in the morning, that’s as good as they’re going to feel all day.”

Keep your wits about you and have a great weekend. 😉

For The Weekenders: Shipwrecked with Rum, Ice Bars, Hangover Therapy… is a post from and appeared first on Rego’s Life

12 thoughts on “For The Weekenders: Shipwrecked with Rum, Ice Bars, Hangover Therapy…”